Uganda is unable to exclusively finance its ambitious infrastructure projects from domestic revenues due to a narrow tax base.
Officials said the tax revenues are lower than 16 per cent of the Gross Domestic Product (GDP), the average for African countries.
Part of the problem, according to experts, is the government’s failure to effectively tax and collect revenues from the informal sector that roughly accounts for half of Uganda’s economy.

The result: overburdened formal employees.
This newspaper’s investigation reveals that the government’s plan to finance up to 80 per cent of its budget from local revenue has failed because of its inability to generate sufficient domestic revenues.
To plug the financial hole, the country has increased its borrowing from both external and domestic creditors, plunging the country to near debt distress.

From 2017/2018 to 2021/2022 Financial Year, which is barely two months away, the government has spent slightly above Shs6.8t of locally-generated revenues on social projects, particularly education, health, and water development.
This is in addition to more than Shs15.8t spent over the same period on mainly designs of projects, constructions of some infrastructure and compensations.
For example, the design of the 238-kilometre Kyenjonjo-Hoima-Masindi-Kigumba road cost Shs43.3b and was paid for by the government of Uganda from local revenue. And over the past five financial years, Shs1.6t of taxpayers’ money was spent on compensation alone.

In the previous five financial years (2015/2016 to 2019/2020), Uganda Revenue Authority (URA) had a target to collect a cumulative Shs76.5t, which proved to be a tall order as evidenced by the Shs4.8t shortfall.
This is an equivalent of about seven times the budget allocated to agriculture sector over past five years.
Save for the FY 2018/19 when URA recorded Shs258b surplus, the other four financial years within the period under consideration, show revenue deficits.

As a result, the country’s public debt stock increased by 98 per cent to Shs56.5t over the 5-year National Development Plan (NDP) II period that started in 2015/16 Financial Year.
Sixty-eight per cent of the cumulative loan is external debt, exerting fiscal pressures not only on the national budget but also on  the economy.
A seperate study by Makerere University College of Business and Management Sciences and Economic Policy Research Centre, among others, have found that despite the tax body’s innovations, only a small percentage of Ugandans pay tax. 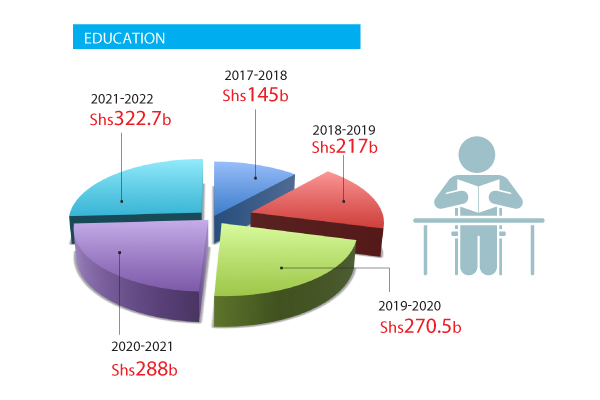 The researchers also found out that only a number of commodities in Uganda are taxed due to what President Museveni describes as “slackness” among tax officials and policymakers.
For decades now, the country’s tax-to-GDP ratio has hovered around 12.5 to 13 per cent, resulting in a five-year domestic revenue mobilisation strategy to up the ratio to at least 16 per cent by 2023.
Experts say Uganda has the potential to drive its tax revenue collection to 23 per cent of its GDP if it closes tax revenue leaks.

However, MP Amos Lugoolobi, the chairperson of Parliament’s Budget Committee, told Daily Monitor in interview that there is no way the government can fully finance its projects without borrowing.
“Revenues collected domestically is always below the total budget required.  [In] the next financial year, URA will be tasked to collect Shs21 trillion yet the entire budget is about Shs44.7 trillion. So, inevitably, [the] government has to borrow to raise the other half of the budget. A fiscal deficit must be filled,” he said.

The lawmaker said the government should maintain its heavy investment in infrastructure projects including for the nascent oil sector, meaning local revenue will remain insufficient for such grand projects.
He suggested cutting down on the increasing public expenditure, saying the cost of public administration and governance is overburdening.
Ms Regina Navuga, the in-charge for Financing for Development Programme at Southern and Eastern Africa Trade, Information and Negotiations Institute (SEATINI-Uganda), in a separate interview, said Uganda is not the only country facing fiscal deficit.

She faulted the government for running a budget beyond its means, and argued that excessive leaks deprive the government much-needed revenue.
“Although taxation is one of the most sustainable ways of mobilising revenue, the government of Uganda is still facing a number of challenges ranging from capacity gap  to laws with loopholes that facilitate tax evasion and avoidance, let alone a large informal sector that all compel government to continue borrowing in order to finance the budget,” Ms Navuga said.
She urged the government to broaden the tax base in a “fair and just way”.