Police have said the death toll in yesterday’s protests that broke out following the arrest of presidential candidate, Robert Kyagulanyi alias Bobi Wine, is now seven with 45 people nursing injuries.

“As of yesterday evening, we had seven people who lost their lives out of the violent ruckus. About 45 people got injuries, including an LDU whose head was smashed,” police spokesperson, Fred Enanga said.

According to police, the National Unity Platform (NUP) led by the Kyadondo East MP, currently detained at Nalufenya police post in Jinja following his arrest in Luuka District where he had gone to campaign, has been using violence as a tool of its campaign.

“But it (NUP) doesn’t have control over these demonstrators. They don’t have the ability to restore a situation that has gone out of hand and yet they’re promoting violence. This is unacceptable,” Mr Enanga told state-owned Uganda Broadcasting Corporation (UBC) on Thursday morning.

“By now, every Ugandan knows the choice of the candidate they want to vote for. We implore them to be patient! As police, we want to see to it that they perform their democratic right in a very peaceful setting,” Mr Enanga added.

The Kyadondo East MP was arrested in the eastern district of Luuka at his campaign venue after police accused him of violating EC guidelines issued to contain the spread of Covid-19 which has killed 157 Ugandans and infected 16,905 others since March this year when the virus outbreak was confirmed in the country.

He was arrested alongside Jinja-based pastor Andrew Muwanguzi and five other supporters. They are currently detained at Nalufenya police post in Jinja where they are being interrogated on charges of negligent conduct likely to spread the infectious disease, obstruction and holding an authorised assembles. 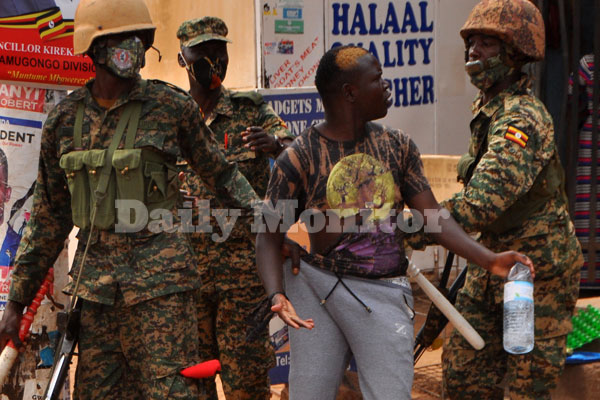 Soldiers arrest a man suspected to have led the group that blocked a road at Kireka near Kampala on November 18, 2020. PHOTO/STEPHEN OTGAE

Police said they had also registered other crimes of looting, vandalism and robbery by criminals taking advantage of the violent demonstrations.

She said the injured included 11 people with gunshot wounds.

Red Cross also registered nine cases of suffocation and victims were referred after receiving first aid. Ten people were unconscious while one was in shock by the time of referral.

Where is Ethiopia going after four weeks of fighting in Tigray?

Abiy claimed the conflict was over after capturing the regional capital Mekele, although Tigrayan leader Debretsion Gebremichael insists his...

First in line for Covid vaccine? Some US health care workers say no