Advertisement
By U R N
More by this Author

Delegates who turned up for elections of National Woman MP for elderly persons were each bribed with Shs40,000 to vote for National Resistance Movement (NRM)’s candidate Peggy Joy Waako.

Ms Waako, a retired social worker and a renowned activist for older persons' welfare, was contesting with the former Minister of State for Ethics and Integrity Miria Matembe who contested as an independent.

According to the results, Ms Waako polled 640 votes, while Matembe got 56 votes. At least 703 delegates participated in the elections.

Several delegates who preferred anonymity told this reporter that they received the cash.

According to the delegates, each district was given Shs200, 000 for the five executive members who form the Electoral College.

“At my age, I cannot lie to you. We received that money I admit. They are paid for our accommodation and meals for Thursday, that is all,” one of the delegates from the central region said.

He added that in the previous regional elections they pocketed not less than two million shillings after getting a ‘token’ from all candidates in addition to their official allowance.

Three delegates from Northern and Western region admitted that they were also given Shs40,000.

Mr Muhammad Muyinda, chairperson elders’ council Bugiri District, who refused to comment on the bribe, noted that with or without being bribed, they would still vote for Waako.

Muyinda noted that Waako has been an advocate for older persons.

Although Matembe declined to comment on the matter, this reporter has established that she has officially complained to the Electoral Commission listing several irregularities that marred the elections.

Muwaya notes that besides Matembe’s complaint, he was also wondering how the NRM candidate had used the venue which was hired by the Electoral Commission to convene the delegates without the EC’s knowledge. 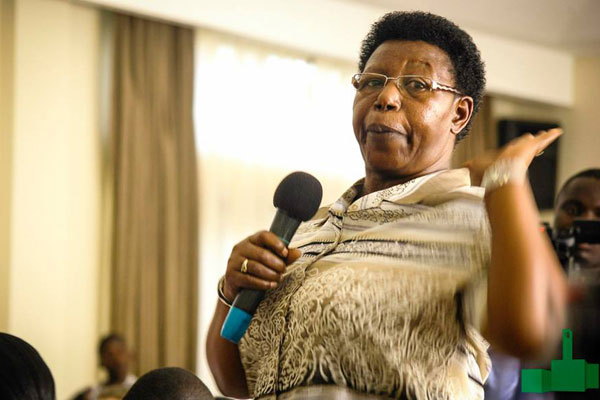 When asked about the bribery allegations, Waako refused to comment saying that she was busy celebrating her victory.

According to the programme, delegates had to arrive in Kampala on the eve of the elections, book accommodation and converge at the IUIU female campus on Friday morning. After arrival, there would be campaigns before voting.

However, Waako and her agents arranged a meeting with delegates at the voting venue from mid-day on Thursday until late in the night, when the bribe was given out.

Several election observers who were at the venue on Thursday evening also witnessed the illegal activities. However, most of them preferred not to be interviewed saying that they will soon release an official statement.

Meanwhile, before the delegates cast their votes, they protested until they are told how much money they were going to receive.

"We are old men and women; we don’t want to be stranded in the city after voting. The officials who invited us should be transparent and fair to tell us what is due for each of us. We don't want to cause scenes after voting," Michael Olee, a delegate from Abim said.

However, Muwaya told them that each delegate would be given an allowance of Shs400,000 on top of transport which could vary depending on the mileage from their respective home district.

Ms Waako said that she will focus on ensuring that social assistance grant for empowerment beneficially age is lowered from 80 to 60 in all district and also advocate that the amount is increased from Shs 25,000 to at least Shs50,000.

In August last year, Parliament Okayed the creation of five seats for elderly persons, one of which was ring-fenced for women and four for Regional representatives. According to official results, the five seats have been taken by the NRM party.