In the early days of May, an irregular visitor winked at the Kyadondo East MP, Mr Robert Kyagulanyi, aka Bobi Wine. On a plastic seat outside the grey coloured conference room of a former youth centre, Mr Asuman Basalirwa, Jeema’s party president, adjusted sets of papers in a brown envelope as he waited to be attended to by Bobi Wine.

He had come as Mr Kyagulanyi and a team of advisers would later find out, to ask for the legislator’s support in the Bugiri by-election in which the Forum For Democratic Change (FDC) supported Ms Eunice Namatende over him.
Mr Basalirwa fancied his chances in the race with FDC’s backing but without it, he would need to recreate his political cards.

Mr Kyagulanyi had won in Kyaddondo East without FDC’s backing. What had propelled him then was a cocktail of endorsements from NRM stalwarts, rebel campaigners, who defied their party structures and a cocktail of newcomers on the political scene.
Months later, Mr Kassiano Wadri (Arua Municipality), in the same predicament – denied the FDC flag - called on Bobi’s support and it became evident that the movement, albeit unstructured, had gained foothold in the political establishment of Opposition politics.
In both elections, Bobi Wine’s campaign team led by Mr Tony Sempebwa had secretly filed reports indicating the hurdles they faced.
Top of both Bugiri and Arua polls’ reports was the fact that separate symbols for the candidates cost them voters despite registering wins. 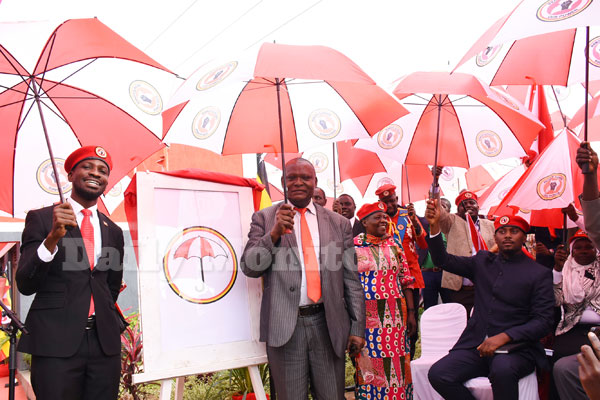 After years of rumination, Moses Nkonge Kibalama decided to join activism to oppose the government that had waged a Bush war against his boss in the 1980s.

In the kitchen cabinet of People Power too, was a growing worry that the politicians Bobi Wine had campaigned for, did not, in turn, return the favour.
For example, Bobi had lent his prominence and support to the youth wing of the Democractic Party (DP)– the Young Democrats. Over three gatherings, the Young Democrats emerged as a formidable wing in the party.
They staged party events of reunion and crowned them off with speeches from Bobi. The Young Democrats though, were a bastion of Opposition to Mr Norbert Mao’s presidency.
To tame the growing prominence, Mr Mao called off all engagements and turned the faction against him. The party revived old rivalry between Bobi Wine and Mr Joseph Mayanja, aka Jose Chameleone.

Mr Wadri increasingly became absent at People Power events and Mr Basalirwa, despite remaining present always took the route of Jeema before calling in at Kamwokya.
“We had always had a debate on whether we needed a party but it was not proper at the time,” Mr David Lewis Rubongoya, the now party secretary general, said.
“People Power was a movement that united people across platforms but drawing closer to the elections, they would need a similar symbol at the polls,” he added.
It became a matter of when, not if, for People Power to form a political party.

NURDP had been formed in 2004 to challenge for the 2006 polls. Its founder, Mr Moses Nkonge Kibalama, bore its early brunt. When he approached People Power in early June 2019, he had hoped to get into an alliance.
The choice of the party, thus, had to be of low prominence, but headed by a person the movement could entrust with their future and to keep a secret.
“We chose the party because we shared similar values. We stood on similar objectives of unity,” Mr Rubongoya said.

By July 2019, as the People Power movement put together a list of national coordinators, it was known to its select members that the political party takeover was a pipework already.
The movement was worried, a source said, telling the covert move to legislators in the movement would attract state scrutiny and potential blocking.
“We were also worried about the loyalty of the MPs from other parties,” the source added.

Bobi Wine secretly bankrolled Mr Kibalama to change the party name with the Electoral Commission (EC) and thereafter to run an advert in the papers for a delegate conference where he would be declared president and the party symbols changed.
“Yes, we had a delegates conference some weeks before this announcement. When the EC officially stamped the name change, we held the delegates conference and took those resolutions,” Mr Mr Rubongoya said.
The final hurdle would come on Thursday last week when the paperwork bearing Mr Kyagulanyi’s name would be presented to the EC.

The electoral body spent a weekend with the paper work and only called back Mr Kibalama on Monday to pick stamped papers.
Central to the move of registering the party was to get a harmonised symbol for all candidates using the movement.
The new party, Daily Monitor understands, will tomorrow morning file paper work for admission to IPOD, a key negotiation table for political parties in Uganda.
“We are also now in talks to have an alliance with other parties that we shall call the ‘People Power Alliance,” Mr Rubongoya said.