The Katuna/Gatuna border between Uganda and Rwanda remains closed to human and cargo traffic more than two years after Rwandan President Paul Kagame  ordered its closure.

Mr Adonia Ayebare, Uganda’s Ambassador and Permanent Representative to the United Nations, says he hopes that relations between the two countries will improve.

“I am optimistic that within about three weeks or one month, we should have something to talk about,” Mr Adonia Ayebare says.

In December 2019,  Mr Ayebare was sent to Kigali as Mr Museveni’s special envoy with a special message to Mr Kagame.

However, sources within the Ministry of Foreign Affairs told Sunday Monitor that very little progress has been made to bring an end to the protracted political dispute between the two countries.

When Rwandan authorities first announced the decision, it was claimed that the closure would allow  renovations at the border.

Cargo traffic was then diverted to Mirama hills and Kyanika border posts in Ntungamo and Kisoro districts, but those too were later closed.

Kigali shortly after issued a travel advisory to its nationals warning them against travelling to Uganda, which it accused of, among other things, abducting its citizens and detaining them in ungazetted areas.

It also accused Uganda of hosting and facilitating activities aimed at destabilising Rwanda.

“Very little progress has been made to resolve some of the sticky issues here. Every meeting seems to bring up more issues,” a source in the Ministry of Foreign Affairs told Sunday Monitor.

Mr Henry Okello-Oryem, the State Minister for Foreign Affairs, however, insists that a lot is going on behind the scenes to normalise relations.

“There are ongoing efforts on both sides at both the highest levels and at the level of the ministries of Foreign Affairs to find mechanisms for normalising relations between the two countries. For example, Rwanda’s new ambassador presented her credentials to Foreign Affairs minister Sam Kuteesa yesterday (Tuesday),” Mr Okello Oryem said.

Since the border was closed, there has  been at least four tripartite meetings involving presidents Joao Lourenço of Angola and Mr Félix Tshisekedi of the DR Congo, and a series of lower level meetings between officials of Foreign Affairs ministries of the two nations, but they have not yielded much.
The first meeting was held in the Angolan Capital, Luanda, in February 2019.

The meeting, which was chaired by President Lourenco and attended by his counterpart Tshisekedi,  aimed at easing tensions between the two countries and finding a lasting solution to the cause of their problems.

During the second meeting in Launda on August 21, 2019 , presidents Museveni and Kagame signed a peace pact aimed at ending months of tensions amid counter accusations of espionage, political killings and economic sabotage.

A statement issued after the signing ceremony indicated that the two had committed themselves to respecting each other’s sovereignty, the sovereignty of their neighbours and to “refrain from actions conducive to destabilisation or subversion in the territory of the other party (and) acts such as financing, training and infiltration of destabilising forces”.

Terms
They also agreed to “protect and respect the rights and freedoms” of people “residing or transiting” through their respective countries and to resume cross-border activities, “including movement of persons and goods ... as soon as possible”.

After the third meeting on February 22, 2020,  in Launda, the two leaders pledged to continue prioritising the permanent dialogue between the two countries for the development and well-being of their peoples, and to take “subsequent steps towards peace, stability, good neighbourliness and restoring mutual trust”.

The summit decided on a five-point course of action, including release of citizens of each country listed by the two countries, refrain from all factors that may create the perception of supporting, financing, training and infiltration of destabilising forces in their neighbour’s territory.

It also called for protection and respect of human rights of citizens of the other party, continuation of the activities of the Ad hoc commission as a mechanism for monitoring the implementation of this process, and holding next quadripartite summit in Gatuna/Katuna on February 21, 2020.

Following the signing in August 2019 of memorandum of understanding (MOU) between the two countries, an Ad hoc committee on the implementation of the terms of the MoU was formed, but it too has not achieved much.

The first meeting of the Ad hoc committee was held in Kigali on September 16, 2019 with a follow-up meeting scheduled to take place in Kampala within 30 days, but it did not.

It was reschuled to November, but that too aborted because Rwanda asked that it be deferred to another date.

ALSO READ:COVID-19: Travellers stranded at Katuna as Uganda, Rwanda close borders
When the second meeting was held in Kampala in December 2019, it ended without reaching an agreement.

Dr Olivier Nduhungirehe, Rwanda’s minister of State for Regional Affairs, indicated that Uganda had not done much to allay Rwanda’s fears.

“No agreement on a solution to the most contentious issues (Uganda’s support to armed groups and illegal detention of Rwandans in Uganda). We agreed to refer the matter to our heads of state,”  Dr Nduhungirehe tweeted.

Some of the alleged dissidents include Mr Tribert Rujugiro Ayabatwa, Ms Charlotte Mukankusi and Ms Prossy Bonabaana, who was said to be the national coordinator in Kampala of Maj Gen Kayumba Nyamwasa’s RNC.

A fortnight prior to the closure of the border, Rwanda’s High Commissioner to Uganda, Maj Gen Frank Mugambage, delivered a message to Mr Museveni in which Mr Kagame demanded the closure of Mr Rujugiro’s businesses on grounds that he was bankrolling rebel activity against Rwanda.

Mr Rujugiro, who had initially been okay with selling his businesses in Uganda, had later changed his mind, saying even if he sold his stake in Uganda, he would retain other factories elsewhere from which he could get money to fund subversive activities.
Mr Museveni advised Rwanda to use Uganda’s courts to prefer charges of terrorism against Mr Rujugiro.
If he were to be found guilty, he said, his assets would be frozen. Mr Museveni has first given that advice on October 15, 2018.
In the same letter, Mr Museveni acknowledged having met Ms Mukankusi and a one Gasana.

Illegal detention of Rwandans claims
Among the key demands set by Rwanda was that Uganda should either free hundreds of its nationals who it claimed were being illegally held in ungazetted places or subject them to the due process of the law.

Before the Gatuna/Katuna meeting, Uganda had released to the Rwandan authorities at least 24 of its nationals, but Kigali insisted that many more remained in unlawful detention.

Whereas the two countries signed an extradition treaty during the fourth quadripartite meeting on February 21, 2020, at Gatuna/Katuna, which would facilitate justice in case their nationals engaged in acts of subversion, Rwanda set new conditions for the reopening of the border.

It gave the authorities in Kampala a month to, among other demands, provide proof of action taken against forces hostile to the regime in Kigali.
Among the demands was verification of the stay and travels of Mr Rujugiro, Ms Bonabana and Ms Mukankusi.

It also demanded for the withdrawal of Ms Mukankusi’s Uganda passport.
“This action must be verified and confirmed by the Ad-Hoc Ministerial Commission for the implementation of the memorandum of understanding of Luanda… Once this recommendation is fulfilled and reported to the heads of states, the facilitators will convene within 15 days, a summit in Gatuna/Katuna for the solemn re-opening of the borders and subsequent normalisation of the relations between the two countries,” read a communique issued after the Gatuna meeting.
Despite the Gatuna border closure, Mr Okello-Oryem says efforts to have it reopened are ongoing.

“All Rwanda’s concerns regarding its security, defections and others are being worked on both at the highest levels and at the Ministry of Foreign Affairs. We are working on a mechanism to have the border reopened,” Mr Okello-Oryem said. 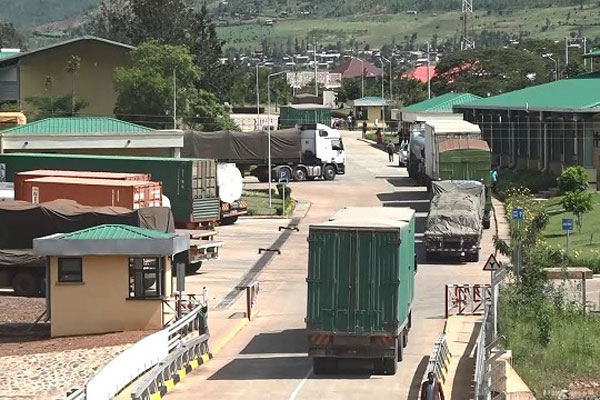 On February 28, 2019, Rwanda closed its border with Uganda at Gatuna claiming it was working on its one-stop-border building. Its authorities later stopped all its nationals from entering Uganda on claims that Uganda was hostile.
All the transit goods crossing into Rwanda were diverted to Mirama hills and Kyanika in Ntungamo and Kisoro districts, respecitvely.

“The closure of Gatuna border left business at the adjacent Katuna border post paralysed because more than 90 per cent of shops, hotels and lodges closed. Katuna Town Council has since lost more than  Shs400m  in revenue,” the town clerk,  Mr Eric Sunday, says.

“We appeal to the central government to consider giving us special funding to run the town council activities the fact that cross-border business, which was the main source of local revenue, is no more,” he adds.
Mr Sunday says in October 2019, he wrote a letter to the Ministry of Fnance notifying them of the financial challenges the town council was experiencing, and requested for supplementary funding but he has not received any feedback.

Ever since Rwanda stopped its nationals from entering Uganda and banned cross-border trade, traders in neighboring communities resorted to smuggling of goods from either side,  resulting in the death of six Ugandans who were shot by Rwandan security operatives.

The chairman for Ryakarimira Town Council, Mr Enock Kazooba, says any Ugandan that crosses into Rwanda to attend functions such as burial of a relative or a wedding is arrested.
His Kyanika counterpart in Kisoro, Mr Erasmus Sanyu, says they need about Shs400m to complete the administration block and other town council infrastructure developments, physical plan and  opening roads, among other projects.

“We used to collect about Shs50m per year as local revenue  from cross-border business at Kyanika Town border post before the Rwandan authorities stopped their nationals from entering Uganda in February 2019.  We have written letters to the ministries of Local Government and that of Finance to consider giving us a special financial offer that can easily compensate the lost local revenue collections but we have not yet received feedback,” Mr Sanyu says
The chairman for clearing agents at Katuna border post, Mr Sam Sserwanga, says all the clearing agents have transferred their services to Mirama hills and Kyanika borders posts in Ntungamo and Kisoro district, respectively.

“About 70 clearing agents operated at Katuna border post before it was closed but almost all of them have shifted to other border posts. Those who stayed are now operating general merchandise shops and bars with hope that the border could be reopened,” Mr Sserwanga says.

He adds that town council authorities should not demand trading licences from the remaining business community since there is no business at the border.

“Those operating shops and bars are doing it on subsistence. Business at Katuna was majorly tied to the hundreds of vehicles and people crossing the border everyday. Katuna authorities should give the people a tax holiday until border business normalises,” Mr Sserwanga says.
By Robert Muhereza

Inside politics of keeping practice of law exclusive

The persistent high failure rate at Law Development Centre has prompted a public outcry questioning how an institution doing a good teaching job...