The International Crimes Division of the High Court in Kampala has issued an arrest warrant for ousted Sudan President Omar al-Bashir.
Justice Henry Peter Adonyo also ruled that Uganda violated its national and international obligations when it failed to arrest 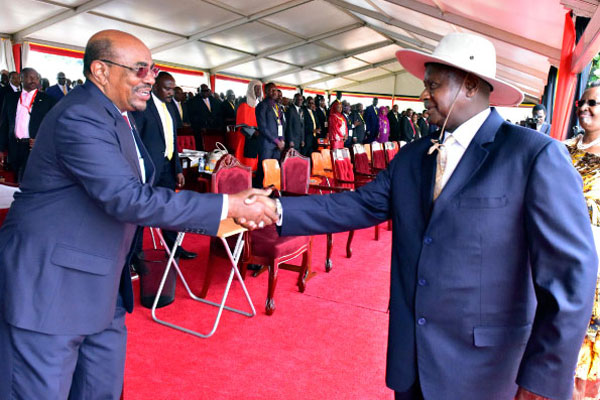 His ruling follows an application that was filed by the Uganda Victims Foundation accusing the government for failing to arrest Bashir.
“For avoidance of any doubt, this honourable court hereby issues its own warrant of arrest against Mr Omar Hassan Ahmad Al Bashir whenever he sets foot within the territory of or under the control of the Republic of Uganda”, ruled Adonyo on Thursday.
In March 2009 and July 12th, 2010, the Pre-trial Chamber 1 of the ICC issued a warrant of arrest against Bashir who was by that time the President of Sudan for war crimes against humanity committed in Dafur.
All ICC member states were accordingly informed to arrest Bashir whenever he visited the countries.

President al-Bashir attended the swearing-in ceremony of President Museveni in 2016. Bashir again visited Uganda in 2017 at the invitation of President Museveni.
Last week, a Sudanese court convicted and sentenced Bashir to two years in jail on charges of corruption, receiving illegal gifts and possessing foreign currency.
Uganda Victims Foundation lawyer Nicholas Opio, said Bashir being in jail at the moment is immaterial since he wasn’t arrested and tried by the ICC.

Sudanese celebrate, demand justice on uprising anniversary
Meanwhile, exuberant crowds took to the streets of Sudan on Thursday to celebrate the first anniversary of the uprising that toppled veteran autocrat Omar al-Bashir and to demand justice for slain protesters.
Thousands turned out in different districts of the capital Khartoum chanting slogans such as "we're revolutionaries, we'll finish our mission," while motorists hung Sudanese flags from their cars.
"We're proud of the revolution," said Hani Hamed, surrounded by a sea of jubilant people.

"Our celebration will not finish until we get justice for our martyrs," echoed Nahla Mohamed.
Many carried pictures of friends and relatives among the dozens of protesters killed during the uprising.
In the town of Atbara, the cradle of the revolt, hundreds of people were expected to arrive by train from Khartoum to stay for a week of festivities.

Organised by the transitional government and the protest movement, it is a tribute to the thousands of demonstrators who travelled in the opposite direction to the capital at key moments during the uprising.
Hundreds of singing, dancing people crammed into two trains for the 350 kilometre (220 mile) journey from Khartoum to Atbara.

"The revolution shall continue," declared one banner carried by the protesters.

"Either we bring them justice or die like them," read another alongside pictures of demonstrators who died.
Limia Osman, 23, wearing a Sudanese flag over her shoulders like many of her fellow passengers, said she wanted to "say thank you" to the original protesters in Atbara.
In Khartoum, celebrations are planned in several districts, particularly at the city's Freedom Square, which was renamed in honour of the protesters.
"I'll remember the first day of our protest under tear gas and live ammunition, which didn't stop us," said Hana Hussein, 21.
The army blocked roads leading to its Khartoum headquarters, where the protesters had staged a weeks-long sit-in outside to demand the end of military rule.

'Horrific crimes'
It was in the dusty streets of Atbara on the banks of the River Nile that Sudanese held their first rallies in December 2018 against a government decision to triple the price of bread.
The protests swept across the African nation and by April, they had toppled Bashir, who had been in power for three decades.
According to doctors linked to the protest movement, more than 250 people were killed in violence related to the demonstrations against Bashir and the military rulers who initially replaced him.

Amnesty International, which says at least 177 people were killed, on Thursday called on Sudan's transitional authorities to honour their commitments to restore the rule of law and protect human rights.
"The new Sudan authorities must ensure that members of the security forces who committed horrific crimes or used excessive force against protestors are held accountable in fair trials without recourse to the death penalty," said Amnesty's Seif Magango.
In August, after protracted talks with the military, protesters and activists won a deal to set up a transitional government and pave the way for civilian rule.

Former senior UN official Abdalla Hamdok, a veteran economist, was appointed transitional prime minister.
Bashir, in prison since his overthrow, was sentenced on Saturday to two years' detention in a correctional centre for the elderly for corruption -- the first of several cases against him.
The charges stemmed from millions of dollars received by the toppled strongman from Saudi Arabia.
In May, Sudan's attorney general said Bashir had been charged with the deaths of those killed during the uprising, without specifying when he would face trial.

Bashir is also wanted by the International Criminal Court (ICC) on charges of genocide, war crimes and crimes against humanity.
The accusations relate to his role in the Darfur war that broke out in 2003, when ethnic minority rebels took up arms against his Arab-dominated government, which they accused of marginalising the region.