Mukula, who is the ruling National Resistance Movement (NRM) vice-chairman for eastern Uganda, assigned himself the role of dismantling any semblance of structure that National Unity Platform (NUP) party presidential candidate Robert Kyagulanyi, alias Bobi Wine, has put in place.

Sources say Capt Mukula’s tactic has been to go wherever Mr Kyagulanyi has finished campaigning and talk his agents into defecting to the NRM side.

“I can confidently say,” Mr Mukula told this newspaper in a phone interview, “that NUP isn’t going to win any parliamentary seat in West Nile, Acholi, Lango, Sebei, Busoga and Bugisu.”

The former Soroti Municipality MP’s efforts to cause havoc in the NUP camp in northern Uganda, which have been embraced by Deputy Speaker of Parliament Jacob Oulanyah, seem to have borne fruit.  This was manifested last Wednesday when youth donning NUP outfit, armed with posters of President Museveni, stormed the party’s Lango regional offices at Odokomit Trading Centre in Lira City. 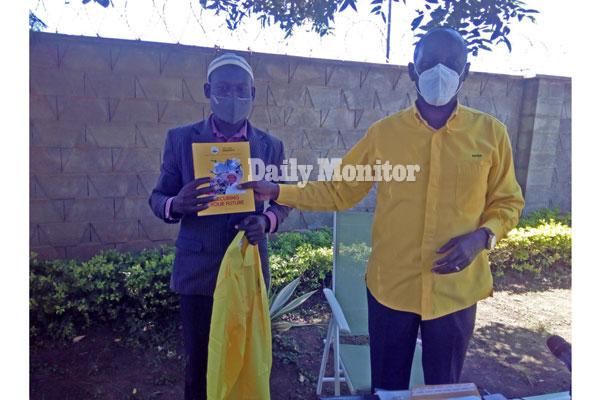 They burnt all the red attire in front of NUP offices before they started chanting slogans praising Mr Museveni and his NRM.   NUP could soon lose those very offices after a letter dated December 4, authored by Okwi & Company Advocates claimed the building had been acquired by TOTCO (U) LTD and that they wanted to occupy the offices within three weeks.  NUP’s response to the recent NRM tactics has been typical.

The party accuses NRM and Mr Museveni of raiding the national coffers to rent support.

“They have run out of ideas,” Joel Ssenyonyi, the NUP spokesperson, says. “Now they just use money to bribe our people. And that money is for taxpayers, not theirs.”

“As we grow strong and stronger,” Mr Kyagulanyi tweeted last Tuesday,  “Gen Museveni’s dictatorship exposes itself more for what it is! For three weeks now, they’ve been paying goons to attack our offices, forcing landlords to revoke contracts, etc. Not a sign of strength. Panic!”

The suggestion that the defections from NUP to NRM were all about money gained credence in a very embarrassing style.

The two joined the NRM and together accused NUP management of losing track and running the party as charlatans, something they claimed conflicted with what they first believed in. 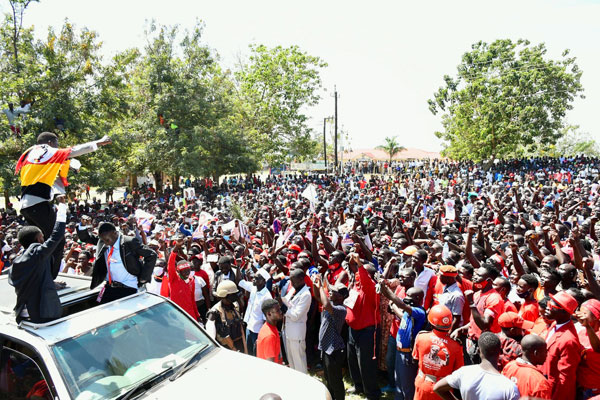 However, within a week of their defection, the two were already fighting over money they received to mobilise for the NRM.

The duo’s first project was in Lira last week when they paraded more than 150 cohorts from the Lango Sub-region, who had reportedly defected to NRM.

All was well until Ocira demanded from Olenge ‘his’ facilitation money for mobilisation for the day-long event but Olenge was having none of it. Instead, he asked him whether he wanted to travel back to Gulu City.

Olenge was expected to share the money with his other colleagues, who included Ocira but he instead allegedly pocketed it.

Although NRM surrogates who were interviewed for this story were quick to downplay the idea that many of the youth leaving NUP to join them are mainly motivated by money, they said the reality is that money is important in politics.

“Money is important in politics but even NRM has struggled, that’s why we are yet to construct a home of our own,” Mukula said. “But I think NUP wanted to be everywhere in this country yet they don’t have the resources to manage an entire country. They are just a new party, they can’t compete with the NRM which has now started serious mobilisation at the village level. Kyagulanyi doesn’t have a grassroot structure to hold ground for him yet I can campaign wherever President Museveni hasn’t reached.”

In Acholi, Benson Ochan, who was contesting for Agago West seat, withdrew in early December on grounds that he had decided to occupy himself elsewhere.

“I took this decision following a job offer which came at a time while I was in the race for a directly elected MP for Agago West Constituency,” Ochan said in a letter addressed to Agago’s returning officer.

He also went an extra mile of recommending to his supporters his former opponent, NRM’s Richard Anywar, citing what he termed as his “formidable leadership skills.”

Mukula’s activities are tandem with President Museveni’s speech in the western city of Hoima last week when he bragged how he had covertly infiltrated Kyagulanyi’s party.

The President, who was pointing fingers, added: “Then there are fools from Bunyoro. I know them as well. That fool… [pointing]. I know them. I have them in my file. Kyagulanyi’s group is not here,” Mr Museveni, who was visibly angry, continued as the crowd laughed.

“I’m going to finish it off because I work under.  You be here shouting oyeeee oyeee.”

Before Mr Museveni could roll into Hoima, which is considered a safe NRM bastion, Rogers Atugonza, NUP’s flag bearer for Hoima East consistency and Racheal Ainebyoona, who was vying for Hoima District Moman MP seat, had withdrawn from the race and consequently quit NUP -  just like others, citing lack of funding and vision by their party.

NUP’s haemorrhage in western Uganda has been extensive. In Kyegegwa District, NUP’s Steven Mondo, who was trying his best to oust NRM’s Jackson Karugaba Kafuuzi from Kyaka South consistency, defected to the NRM together with Beatrice Hashaka, who was vying for the Woman MP slot currently occupied by Stella Kiiza, an NRM-leaning Independent.

The duo, who defected together with Ivan Mwirumbi, who was contesting for Mwenge North in Kamwenge District, were officially welcomed by Defence minister Adolf Mwesigye, who is the Bunyangabu County MP.

The defecation of the trio leaves Moses Rukundo, who is standing in Fort Portal City as the only NUP candidate in Tooro Sub-region.

In Kiruhura District, home of Mr Museveni, NUP was subjected to a humiliation, when NUP offices found in Kashongi County were changed into NRM offices after a group of about 700 youth, who claimed to be supports of the new party, were delivered by Seth Agaba, until then, NUP’s coordinator in the district to Mr Museveni’s brother Shadrack Nzeire, who is the Kiruhura NRM chairperson.

But still, the north is where NUP’s machinery has crumbled the most.

On Thursday, NRM carried out another raid on NUP’s Sembabule candidates which resulted into the defection of Henry Mawejje Nyanzi who was vying for Mawogola North parliamentary seat and Goreth Namugga who was vying for Mawogola South seat. They handed over their NUP cards to Sembabule NRM chairperson, Sam Kahamba Kutesa. This means that NRM candidates are now taking on NRM leaning Independents.

In the West Nile, Mr Kyagulanyi had massive crowd when he was campaigning in Koboko Municipality in early December, but Robert Olore, NUP’s coordinator in both Koboko and Moyo districts, crossed over to the NRM side on December 21, together with 97 people who he said were NUP campaigners.

“Fellow West Nilers, we are very much sorry for what we did in the beginning,” Olore, who was received by Mr Oulanyah, who is also NRM’s vice chairman for northern Uganda,” he said.

“We were misled by Dr Lina Zedriga [NUP’s vice president for northern Uganda] that Bobi Wine will facilitate us with Shs1 million each for vote-hunting but ever since the campaigns began, the musician-turned politician has never fulfilled his pledge,” They said.

Although it has been argued that NUP has faced mass defections because many of its candidates weren’t ideologically grounded since the party was hurrying to get candidates across the country, NUP officials seem to perceive things differently.

“We have had senior politicians in other opposition parties defecting,” Mr Ssenyonyi says.

“So I think it is not about inexperience but what kind of person are you? Those who defect are the unserious ones who are looking for money.”

In the east, some damage has been done but not to the extent of the north or western regions.  In Teso Sub-region, which is Mukula’s backyard, the race for Kumi County MP has six candidates after NUP’s Twalib Osama quit the race, citing family concerns.

Although Sam Emorut of the Forum for Democratic Change (FDC) has a good chance of winning, Osama, upon quitting the race, said he joined NRM and thus he was backing Sidronius Okaasai Opolot.

In Busia, NUP’s candidates for both Samia Bugwe North and South are said to have quit their respective races and joined the ruling party.

The only positive for the party is that it has so far held firm in its stronghold Buganda and no big fish from its Kamwokya headquarters has decamped.

Zaituni Yahaya Babikola, who was standing for Sembabule Woman MP seat, is the only notable NUP candidate in Buganda who has prematurely bowed out, citing financial constraints.

“I think it’s clear they are pulling out from races they can’t win,” Mwabustya Ndebesa, a senior lecturer of history at Makerere university, explained in a phone interview.” It’s very hard to convince a candidate who is going to win or has a plausible chance of winning to pull out of the race.”

Those who are familiar with Mukula’s programme say after the Christmas period, he will camp in Bugisu sub-region.

Sources say he will focus on Manjiya County, which is currently being represented by NUPs’ vice president for eastern Uganda, John Baptist Nambeshe.

Nambeshe was an NRM member before he joined the People Power movement led by Mr Kyagulanyi, which later metamorphosed into NUP.