Unfulfilled Potential.  Gibby Kalule, Charles Kayemba and Baker Mbowa were natural strikers, or call them traditional number 9s that were energetic and had great flexibility in opponents’ goal area. Besides, they were all known to have had a good game reading which gave them a big advantage while on the pitch. Kayemba and Kalule, often referred to as Gibby, both played for SC Villa, while Mbowa excelled for KCCA. Gibby also played for KCCA at some point.

Advertisement
By Robert Mugagga
More by this Author

Gibby Kalule first shot to prominence during his secondary school days at Lubiri SSS. The school has a rich history and produced players like George Ssemwogerere, Chris Kasasa, Robert Mukiibi, Richard Kirumira, James Kirinnya, James Odoch, Fred Kajoba, Andy Lule , Robert Ssemakula, Edward Golola, Aloysius Kyazze, Khalid Kinene and Dan Ntale.
Just like the rest, Gibby was mentored by coach Eddie Butindo who besides coaching the school team also managed Miracle Centre FC which featured in the national league back then.
As coach of Lubiri, Butindo used this opportunity to feed Miracle with promising young footballers who included Gibby.
There, Gibby partnered well with the likes of Edgar Watson, Ntale, Mukiibi, Lule, Aloysius Kyazze, Robert Nyanzi and Richard Lubwama.
In 1993, Gibby was part of the Miracle team that made headlines for knocking out the mighty SC Villa from the Uganda Cup at the quarterfinals.
He also played a pivotal role when the church-founded club stormed into the super league division in 1995.
A year later, the bulk of the team left Miracle for greener pastures. Gibby and Watson were signed by Villa.
It din’t work out for Gibby who was shown the exit door at the end of the 1997 season. How did it come about?  Well, the tension was too much at the Villa camp ahead of a crucial league match against KCCA and which could decide the league winner.
Unfounded rumours went around within Villa that KCCA had bribed some top Villa players to throw away the match.
Without carrying out investigations, the Villa management went ahead to wield the axe by chopping Gibby along with Livingstone Mbabazi, Livingston Kyobe, Fred Makokha, Adolf Bola and Paul Mutakabala.
All of them were given an immediate order to vacate Villa Park. Their absence badly affected Villa who ended up losing the match 2-0 and thus donating the title to KCCA.
Instead, Villa finished the league in a miserable fourth position with 71 points, behind winenrs KCCA (76), UEB (73) and Express (72). Gibby moved to KCCA.
Tom Lwanga , one of his coaches at Lugogo described him as a talented striker who depended on his game reading.
“I found Gibby to be a talented footballer on whom we at times depended to win difficult matches,” Lwanga says.
In May 1999, when Paul Hasule was assigned to handle the national team, he summoned Gibby for his first Uganda Cranes’ match against Zambia.
“There should not be any cause for alarm because the team has good players in the starting line-up. Besides, I have cover on the bench from Gibby and Charles Kayemba in striking, Patrick Mbaziira in midfield and Aggrey Bigala in defence,” Hasule said then.
He didn’t prosper much with the Cranes. On retirement Gibby formed the G.K Sports agency that helps to market players to clubs in Uganda and abroad. He has gained people’s confidence. Just recently, when the Uganda Ex-International footballers association was revived, Gibby was assigned the treasury role.
He has also ventured into administration and was prominent in opposing the proposal to trim the StarTimes Uganda Premier League clubs from 16 to 12 last year.
“We need to move football to various regions of the country and this can only be done in a league where we have many clubs. This will lead to the development of new talents from several parts of the country,” Gibby argued.

KALULE FACTFILE
ACHIEVEMENTS
l Excelled for Lubiri SSS at National Post Primary School Championships.
l Played for Miracle, SC Villa, KCCA FC and Police FC.
l Was part of the Miracle FC that eliminated SC Villa from the Uganda Cup in 1993.
l Helped Miracle gain promotion to the Nile Super Super League in 1995.
l He formed the GK Sports Agency that negotiates the sell of players.
l Was recently named the treasurer of the ex-internationals.

Mbowa is described by Tom Lwanga, his former coach at KCCA, as a striker who was so fast, clever and very flexible while on the pitch.
“Baker was a rare number nine with a powerful left foot and easily used to score goals with both the head and feet. He was someone that had a very good game reading, a player any club could depend on at difficult times.” Lwanga explains.
Mbowa’s moment came in 1997 when KCCA played Esperance of Tunisia in the semifinals of the Caf Cup losing 3-1 to the North African giants at Nakivubo.
“Mbowa demonstrated his scoring ability by beating his marker, a huge Tunisian defender twice his size, to score KCCA’s consolation goal,” Lwanga says. 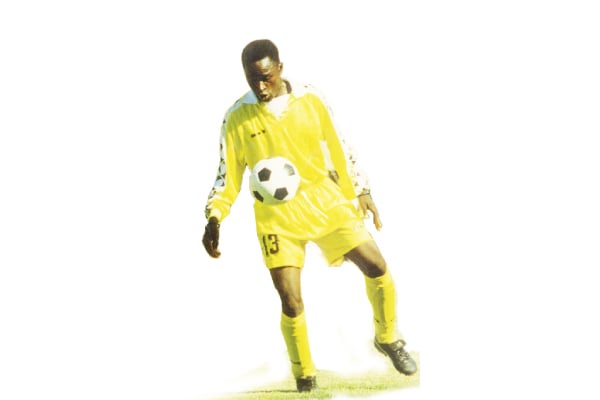 Affable Man. Mbowa was a willing runner, dribbler and fine game reader. He created several chances through his testing crosses from the right flank. KCCA fans were quick to anoint him the successor of legendary winger Peter Mazinga. PHOTO/JB SSENKUBUGE

During that 1997 season, Mbowa played some of his best football to enable KCCA eliminate Rwanda FC of Rwanda, AS Bantous of DR Congo and AFC Leopards of Kenya enroute the semifinals.
On the local scene, he was an influential member of that KCCA team that won the 1997 league title on the last day of the season after beating a depleted SC Villa side 2-0 at Nakivubo.
That KCCA team had Jackson Mayanja, Haruna Mawa, Morley Byekwaso, Wilber Musika, Lawrence Musoke and Godfrey Mugisha.
Apart from Mayanja, who had just returned from a professional stint in North Africa, the majority of players were youth who had been signed by coach Mike Mutebi.
They had only come to act as cover for an ageing squad. Mutebi left the club midway that season with Lwanga leading it to the league title.
The KCCA policy then meant that upcoming youthful players however good they happened to be hardly got a chance of being fielded when the veterans were still at large. This was one reason it took Mbowa longer than it should have to get fielded after being signed in 1994.
Mbowa is said to have been spotted by Jack Ibaale (RIP) who was the KCCA chairman after watching him in action for his lower division side Chicago Youngsters.
He was attending Old Kampala SSS before moving to Naggalama Islamic Institute where he linked up with Ibrahim Ssekagya, Wilson Ggayi and Mohammed Byansi.During his stay at KCCA, Mbowa proved a fierce warrior who scored vital goals for KCCA like the winner against Villa in a 1995 league match plus another that eliminated Express from the 1997 Uganda Cup at the semifinal stage.
He would have played for longer if it had not been for persistent injuries that affected that kept him out in the cold for long periods.
For Uganda, Mbowa was first summoned to the national youth team whilst a student at Naggalama and played in the 1995 Cecafa youth tournament in Ethiopia.
With the Uganda Cranes, Mbowa was very unfortunate to emerge on the scene at the time when he could only stay in the shadows of Magid Musisi, Hassan Mubiru and Andrew ‘Fimbo’ Mukasa.
So, apart from his appearance in the May 1996 friendly against Kenya, he remained a squad player but didn’t get any playing time up to 1999 when he was dropped.
Since retiring he has had a coaching stints at KCCA, Masaka LC, Proline and Bright Stars. Mbowa has also teams in the Masaza Cup competition including Kabula and Mawokota.
This year, Mbowa founded an academy he named “Baker Football Academy” with the aim of promoting young talents in Kawempe division.
“BFC academy aims at identifying and nurturing talents from the grassroots. The international exposure is going to be paramount because we want to promote our players outside Uganda,” Mbowa said.

CHARLES KAYEMBA
In 1998, when SC Villa won the league and cup double, Charles Kayemba (RIP) was the club’s leading striker who formed a great partnership with Hassan Mubiru.
The duo terrorized defences. At the time, the youthful Andrew ‘Fimbo’ Mukasa was still languishing in Kayemba’s shadows.

Kayemba played a major role in enabling SC Villa to end the 1998 season with two trophies. In the first match of the second round, Villa played KCCA, the team that had denied them the title the previous season on the final day.
Towards the final whistle, with the match destined to end in a goalless draw, Kayemba headed in the all-important killer goal that left goalkeeper Hussein Ssali beaten off an Iddi Batambuze pass. The latter had come off the bench.
He repeated the magic in the final match of the season against archrivals Express. The Red Eagles needed just a draw to clinch the league title while Villa had to win by all means.

Captain George Ssemwogerere put Express in the lead after converting a first half penalty. On resumption Mubiru equalized for Villa but in the dying minutes of the game, Kayemba changed the complexion of the game.

Gangly Striker. UCB’s Charles Kayemba (R) shields the ball away from Express FC’s Richard Amatire at Bugembe Stadium back then.

With Express fans already singing and cheering to welcome in the latest league trophy at Wankulukuku, Kayemba received the ball on the right and raced past left back Richard Makumbi to get into the box only to be fouled by two Express defenders as he aimed to cross the ball to Mubiru.

The referee promptly pointed to the spot and Mubiru prepared to take the penalty. At this very moment, Ssemwogerere ordered keeper Isa Bin Mungu to get out of the goal. The match was abandoned and later awarded to Villa who became champions for the first time since 1994.
To crown Villa’s triumph, Kayemba emerged the league’s top scorer with 18 goals (according to Fufa records) though some observers dispute this saying he notched only 12 goals.

Sunday Monitor scribe, Swaib Raul Kanyike, once a ball-boy at Villa Park, describes Kayemba as having been a powerful, gangly and robust striker.
“Kayemba was an animal on the pitch. He meant business and was a nightmare to many defenders. He was a charging rhino whenever teammate Phillip Ssozi brought in those crosses. He would jump and tear defenders to pieces mid-air,” Kanyike says.
According to Kanyike, Kayemba was a hard worker who ran all over the forward zone to either pick the ball or pull away from the defender.

Another story told about Kayemba was how had he used to train. Many described as one who sweat like he had been battered by a heavy hailstorm.
“In the middle of those training sessions, Kayemba would sometimes pull off his jersey and squeeze it tight with sweat pouring down like he was doing some laundry,” recalls Kanyike.
Even the ball boys were not spared as seen during the 1999 Cecafa Kagame Cup quarterfinal games against Ethiopia’s Electricity at Nakivubo.

Kayemba was first summoned to the Uganda Cranes during the era of coach Asuman Lubowa but did not feature until Paul Hasule took over in 1999.
He brought him on as a substitute during an Africa Cup of Nations qualifying game against Liberia.
His life came to a sad end as he committed suicide inside his home. On April 21, 2004, Kayemba’s decomposing body was found inside his locked house.
He had just returned from a professional career in Vietnam only to find out that the money he had been sending back home was nowhere to be seen having been misused by relatives.
That’s the tragedy that befell Kayemba who came through St. Henry’s College, Kitovu where Villa spotted him in 1994.