As I piece this article together,  waves gently brush the shoreline.

A cool breeze sweeps from Lake Victoria to the lounging and restaurant area of Ngamba Island Chimpanzee Sanctuary.

Birds tweet while the white egrets line the sandy shoreline; their squeals are loud as the brown feathered hammerkops silently look on. Also on the sands are the tough ladies, the spur-winged lapwings.

One is enduring the 2pm sun to protect her eggs. It knows too well that somewhere, the monitor lizards have their eyes wide open because the lapwings’ eggs are prey.

On our arrival, with a family of four which had visited for the 2.30pm feeding session, we were welcomed by warm staff of the sanctuary.

The chimps
From a distance, the chimpanzees assemble and excitedly bellow out jungle tunes as they await their third meal of the day. Their keepers are loading steel buckets of papaya. The apes are good timekeepers. 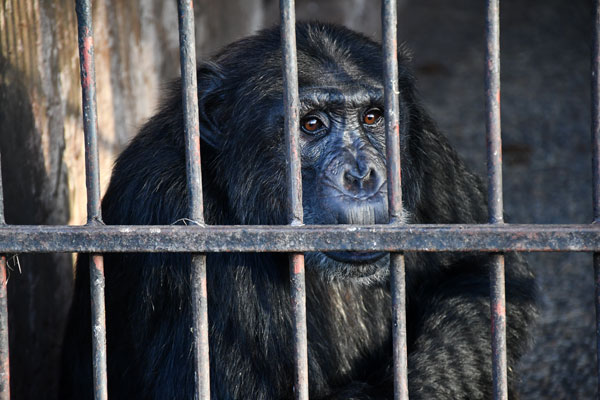 One of the chimps.

Their meal will be served in half an hour but they are eagerly waiting. As Joseph Kaale, an animal caregiver at the sanctuary leads me to the feeding point, the chattering of weaver birds is all the noisy music  in the air.

Along the footpath, the water thicknee silently pecks for some insects from the ground while a monitor lizard jumps out of its cool haven to snake its way into the waters to feed on crabs as it sunbathes.

At first sight, some chimpanzees thump their chests while others move about. As soon as their caretakers, Innocent Ampeire, Ronald Bataze and Andrew Odera start throwing fruit, their agility is brought to life. Some who have not got a portion of the meal, raise their hands.

Chimpanzees are beautiful mammals. If you observe how they play, groom one another, how mothers  express their affection for their little ones and how lovers do their thing, you will  be hooked too.

The bullies will not miss a moment to bring their patronising manners to life.  Every chimpanzee is partly human. They have 98.7 per cent human DNA and their gestures prove as much.

“Chimpanzees are more like us than any other living beings, not only in physiology, but also in social behaviour, the emotions, and cognition. The line between humans and the rest of the animal kingdom, once thought to be so sharp, has become blurred. Chimpanzees bridge the gap between ‘us’ and ‘them.’,” Jane Goodall writes in 40 years at Gombe : a tribute to four decades of wildlife research, education, and conservation.

Their traits
At the sanctuary, caregivers know each of these individuals by name and character traits so when Umutama exhibits gluttonous tendencies by hounding others off the fruity meal, he is warned and knows better to share lest he will not be given more the next meal.

Somewhere in the middle, sits Kisembo, the alpha male who is the boss. He does not entertain naughty tendencies from his subjects and teenagers who might feel more agile and act funny to disorganise the establishment.

He is given his distance, out of respect. His wife occasionally comes close to softly pinch his chin and cheek. He obliges and will reciprocate with a gentle part on her back.

Young Ruparelia seems to be the favourite of the lot as he moves about from one end to another with ease and poise. From a camera viewpoint, I click away as I document nature in a sanctuary some of these animals have called home for the 24 years Ngamba has existed.

Clean and fresh
Tucked away from the hustle and bustle of the city, staying at the island is therapeutic. Then, the slow dosage of digital pollution is much appreciated because not all places of the sanctuary have Internet signal. Roving about with a camera to capture bird life is satisfying.

Sights
At nightfall, my eyes sort of alert my hands to hold a camera, again, first to capture the beautiful sunset and later on star-studded skies. On the horizon, are lights from some nearby island villages. If you see less of me in the city, you will know where I have escaped to. I am sure that island life will offer you some relaxing moments.

To get to the island,  we took a speed boat. The waves were somewhat strong but that is a story for another day.