The Archbishop of the Archdiocese of Kampala, Dr Cyprian Kizito Lwanga has died, the Catholic Church has said.
He was reportedly found dead in his house this morning.

"With deep sorrow, I hereby inform you that our beloved Shepherd, the Archibishop of Kampala Archdiocese, His Grace Dr Cyprian Kizito Lwanga has been called to the House of the Lord. The Archbishop was found dead in his room this morning. We pray that the Almighty and Merciful God may grant him eternal rest," said Fr Pius Male Ssentumbwe in a statement released on Saturday afternoon.

"Further arrangements will be communicated later," he added.

Dr Lwanga was last seen in public yesterday (April 2, 2021) as he said mass at Rubaga Catholic church where he led the homily of Good Friday celebrations.

In December last year, the Archbishop was in the spotlight for calling for postponement of January 2021 elections.

Addressing journalists in Kampala, Dr Lwanga who appeared with some members of the Uganda Joint Christian Council (UJCC) which he chaired suggested that the presidential elections be postponed for three years to contain the spread of coronavirus.

“We know the Constitution says if elections are postponed, the Speaker of Parliament takes over government. Article 259 of the Constitution allows Parliament to amend laws. We are asking Parliament to sit down and amend the Constitution to allow President Museveni to continue ruling and guiding the country during the period of three-year postponement of elections,” Dr Lwanga said on December 24, 2020 attracting public backlash from, especially opposition politicians who accused him of hobnobbing with members of the ruling government.

READ: What does it mean for doves to defy the clergy?

Later, Dr Lwanga said his suggestion had been misinterpreted by the public before he decried growing cases of misinformation on social media which he said several Ugandans were misusing. 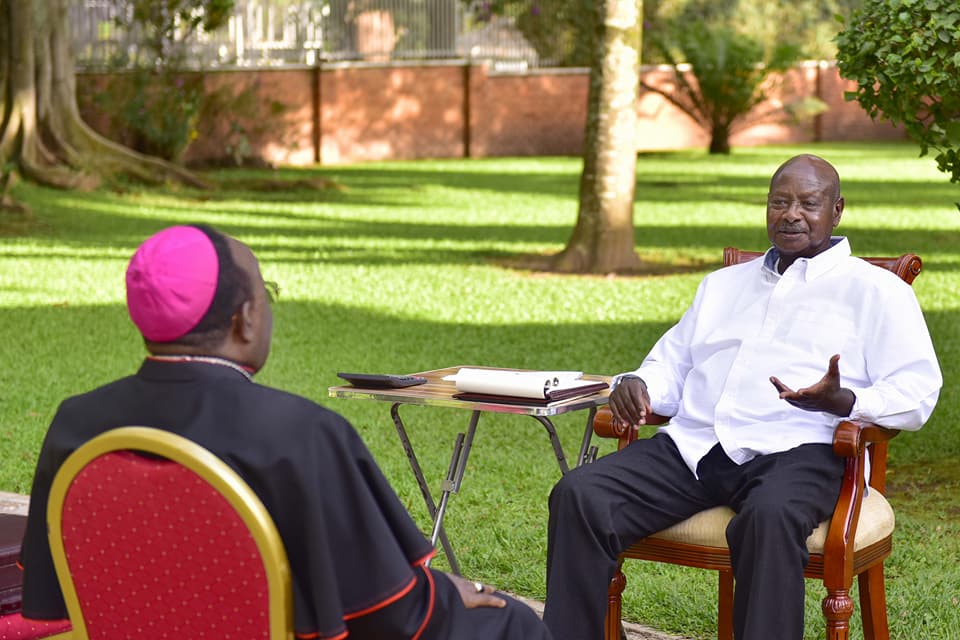 Archbishop Lwanga and President Museveni pictured at State House, Nakasero in April 2018 after a meeting following a Good Friday sermon (2018) where the prelate revealed that his life had been threatened by an anonymous caller who claimed the state had received information linking him to a plot to overthrow the government.

During a sermon on Good Friday in April 2018, Dr Lwanga revealed that his life had been threatened by an anonymous caller who claimed the state had received information linking him to a plot to overthrow the government.

The caller reportedly told him that government had recruited informants within the church’s ‘set up’- who had surrendered information to the president on the alleged plot.

"A few days ago I got a telephone call and on the the telephone you can see the number of the person but it had 'private', so I didn’t know [who was calling]. This person had an accent from western Uganda and this is what he told me. That 'there are many lies being told to the president'. Two, that 'even members of these organisations have recruited your priests, your sisters, your brothers, even catechists and even seminarians.' And I said, 'what?'

"Even this man [anonymous caller] told me last week that be careful my Grace. You might be the next [Janan] Luwum. I said my goodness! If God wants me to die that way, I will. But if I am going to die for wrong accusations, that is criminal. You know for murdering people there are two things; you can shoot a person over what they call character assassination. So some members of ESO, ISO, CMI etcetera, they are character assassinating people and that is not good. But fortunately, those of you who are believers, there is still in a period of lent which are concluding tomorrow…I kindly call upon you to repent and stop telling lies." Lwanga pleaded.

"I call upon all of you to stop telling lies. Stop misleading our president. Mr President we love you very much and that is why we have been electing you. These people are your enemies. They’re going to make you fail because your mind is poisoned and you act on such information."

Meeting with president
Days later, President Museveni summoned him to State House, Nakasero where they met and held talks.

“I held private fruitful deliberations with His Grace, the Archbishop of Kampala Archdiocese, the Most Reverend Cyprian Kizito Lwanga, at State House Nakasero,” a statement on President Museveni's Facebook page read.

Lwanga attended Kyabakadde Primary School. He entered Nyenga Seminary in 1964. Between 1972 and 1974, he studied at Katigondo National Major Seminary, in present-day Kalungu District. He then studied Theology at Ggaba National Seminary, in Kampala. In 1979, he joined the University of Clermont-Ferrand in France, were he studied administration and languages, with particular emphasis on administration. Later, he studied at Pontifical University of the Holy Cross in Rome, where in 1994, he earned a doctorate in Canon Law.

He was ordained a priest on April 8, 1978 at Rubaga Cathedral by Cardinal Emmanuel Kiwanuka Nsubuga. He served as a priest of Kampala Archdiocese until November 30, 1996.
He was appointed first bishop of the Diocese of Kasana-Luweero on November 30, 1996 and consecrated bishop on March 1, 1997 at Kasana-Luweero, by Cardinal Emmanuel Wamala, Archbishop of Kampala, assisted by Bishop Joseph Bernard Louis Willigers, Bishop of Jinja and Bishop Paul Lokiru Kalanda, Bishop of Fort Portal.

Two dead, one injured in four-car crash in Mabira forest

ASP Justine Opus, the Ssezibwa regional traffic officer attributed the cause of the accident to reckless driving

Col Raphael Kiptoo from the EAC Secretariat said they would discuss the growing tension in the region, adding that a formal report would be...

Stabex sued over unauthorised use of former employee’s images

WHO chief vows 'profound transformation' of agency after abuse scandal