Advertisement
By Alex Tumuhimbise
More by this Author

Hundreds of faith of unity believers and followers on Sunday thronged Kapyeemi hill, Muhorro town council, Kagadi District to send off self-proclaimed god Owobusobozi Bisaka whose body has been preserved for future viewing.

Owobusobozi, the founder of the religious sect died at the age of 91 years on January 14. During his burial ceremony on Sunday, his body was preserved and kept in a glass coffin which was put in one of the rooms of his flashy villa at Kapyeemi, the headquarters of the faith of unity religious sect.

A handful of mourners, especially local leaders, biological children, Bisaka’s wives and high priests of the faith of unity locally known as Abakwenda were allowed to access the room where his body was kept.

President Museveni who was the chief mourner was represented by the finance minister, Mr Matia Kasaija who is also the Buyanja county Member of Parliament in Kibaale District.

He described Owobusobozi as a unique religious leader who used his gift to transform the people.

‘‘Passing on of Owobusobozi Bisaka has robbed the faith of unity of a great religious leader who used his spiritual gift to bestow healing, guidance and care to his followers. During his life time, he was able to attract a big following of believers who profess total commitment to his religious teachings and worship rituals. The late Owobusobozi Bisaka utilized his platform as a religious leader to promote good morals and discipline among his followers,’’ Mr Museveni said in a speech read by Mr Kasaija.

He further urged the faith of unity believers to emulate the good example set by Bisaka.

‘‘I urge you to continue upholding the path of righteousness and good conduct which he preached. He will be remembered for mobilizing his followers to support government programmes geared towards social economic transformation,’’ Mr Museveni added.

A huge crowd of his followers that was blocked from accessing Bisaka’s home in a bid to enforce Covid-19 standard operating procedures gathered at a playground a few meters away.

After Bisaka’s death, a debate ensued in the public domain on whether his religious sect will survive in his absence.

However, Omuhereza Alinda Akugizibwe who presented a statement from Bisaka’s home said the faith of unity will survive because their god (Bisaka) had not died.

‘‘First of all, god does not die and whoever has been preparing to come and robe or take away the wealth and property of Bisaka should not bother. There are people who have been getting visions of Bisaka even after his death,’’ Mr Akugizibwe said.

More than Shs 90 million was collected as condolence and given to the children and wives of Bisaka. 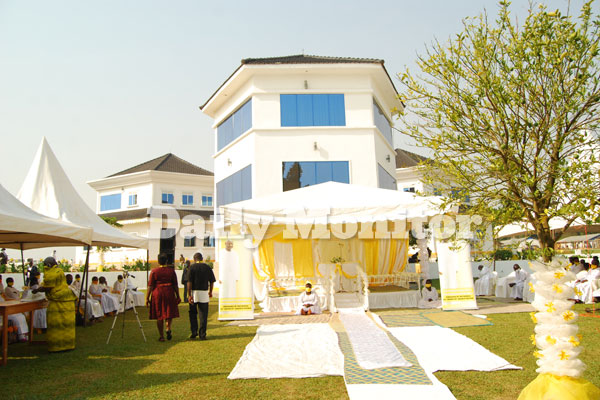 The villa where Owobusobozi's body was kept after it was embalmed.

Bisaka did not leave behind a will nor heir, according to his family.

Many local leaders who turned up at the function hailed Bisaka for his efforts towards unifying people through his religious teachings.

‘‘I’m going to push the agenda to make sure this place becomes a healing city. I grew up here. This was a bush but from the time he started his work, the place is shining,’’ Mr Tinkasimiire said.

Bisaka was born on June 11, 1930 in Kitoma-Kiboizi village in Buyanja County, Kibaale District in Western Uganda. His parents were Petero Byombi and Agnes Kaboora.

Both of them were staunch members of Bujuni Catholic parish in Kagadi District.

Bisaka spent little time with his parents as he lived and grew up with his grandparents from the age of eight. His father was a catholic catechist as was his grandfather, Alifonsio Wenkere, who was a pioneer convert at Bujuni Catholic parish.

His grandmother, Martha Nyakaka was also a Catholic convert and a captive in the palace of Mengo where she witnessed the martyrdom of Charles Lwanga and 21 other Ugandans in the 19th century.

Bisaka attended Mugalike School in 1944; he applied to enroll into the Catholic seminary where local priests were being trained but was not successful.  He then went to Nsamizi Teachers College, Mityana, where he trained to become a teacher.

On graduation, he was employed at Muhorro Catholic Primary School where he taught for 35 years. Like his father and grandfather who were catechists in the Catholic Church, Bisaka was a prominent member of the local cult and leader of the parish laity.

He was parish council secretary, a position that gave him access to high-level decision-making platform in the management of the ritual life of the church.

Because the ecclesiastic leadership noticed his devotion, he was also appointed as the advisor to the group known as the Legion of Mary Mother of Grace Confraternity.

Here he had to guide the members of the laity in their devotion to Mary, the mother of Jesus Christ, as well as teach the group elements of Catholic doctrines and liaise between the group’s leadership and parish and diocesan leadership of the Catholic Church.

Significant in Bisaka’s future ambition and mission was his musical gifts and skills, which led to his appointment into the Catholic Diocese of Hoima’s liturgical committee.

As the choirmaster of the parish in Muhorro, he was a composer of liturgical hymns for the church beyond the parish level, a practice that soon brought recognition and popularity to him, but also a grudge.

The Catholic Diocese of Hoima made use of his hymns in its rituals without adequately remunerating him. While Bisaka’s sacred hymn composition started in 1966, it was not until 1975 that a radical change occurred that would ultimately precipitate the formation of the Fountain of Unity.